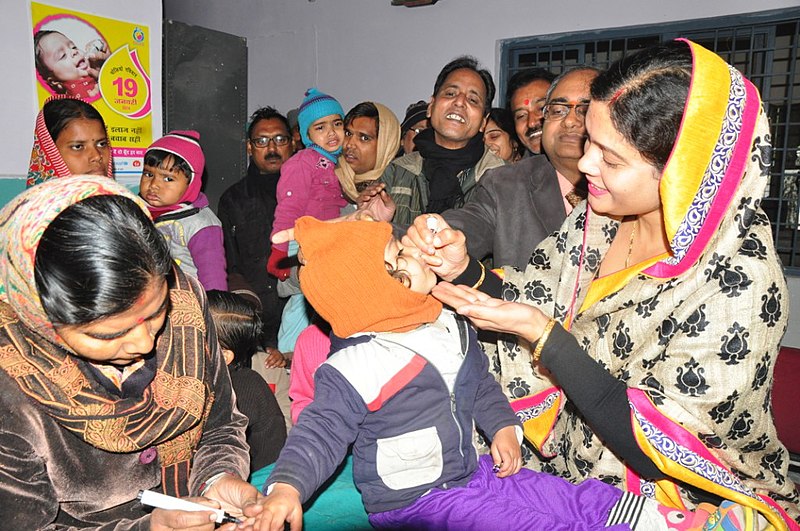 By Theo Richardson-GoolJune 29, 2022No Comments

This report shows how the government of India’s 1994 Pulse Polio immunization program eradicated poliomyelitis from the country within 16 years. As long as a single child remains infected, we cannot live in a Polio-free world and must have consistent and collaborative efforts to eradicate the disease in all countries.

There are three strains of wild poliovirus (type 1, 2, and 3). Type 2 was eradicated in 1999, and the last known case of type 3 was reported in Nigeria in November 2012. Type 1 still affects two countries- Pakistan and Afghanistan, while type 2 and 3 have officially been certified as globally eradicated (WHO).

In 1994, the government of India launched a nationwide Pulse Polio immunization program to eradicate poliomyelitis from the country. This was in commitment to the resolution passed by the World Health Assembly for the eradication of the diseases by forming the Global Polio Eradication Initiative (GPEI) in 1988. It was the world’s most extensive coordinated vaccination campaign, with millions of frontline workers vaccinating 170 million children under five during national and sub-national level immunization rounds yearly (GOI).

Pulse Polio was the world’s most extensive coordinated vaccination campaign, with millions of frontline workers vaccinating 170 million children under five.

To immunise all the children was a mammoth task, given the country’s highly contaminated regions of poliovirus were situated in hard-to-reach areas and amongst underserved communities. Low sanitation and hygiene levels in these areas contributed to the rising number of cases. There was strong sociocultural resistance to immunisation among the minority communities. But the support of social mobilisation network (SMNet) and an effective behaviour change strategy encompassing a range of community focussed efforts helped overcome the challenges (Deutsch et al, 2017).

*Please note the recently detected Poliovirus in London is classified as ‘Vaccine derived’ Polio Virus Type 2. Not Wild Polio. The UK was declared polio-free in 2003 (Gov.uk). For further information please see the footnote in this article.

SMNet was a 4-tiered community mobilisation and supervisory network created in the most challenging states of Uttar Pradesh and Bihar and later extended to West Bengal in the ongoing eradication effort. UNICEF managed the network and it comprised a workforce of more than 6000 Community Mobilization Coordinators, of which 90% were women from local communities (Deutsch).

The task of this network was to identify and engage with high-risk communities and address their concerns and hesitancy regarding the polio vaccine. The network also promoted handwashing with soap, exclusive breastfeeding, diarrhoea prevention and management to tackle polio transmission. SMNet worked on evidence-based communication planning, developed, and maintained interpersonal communication skills for mobilisation of individuals and groups, focussed on outreach and advocacy, and created effective partnership, supervision, and accountability for action.

The country accounted for nearly 60% of the total cases at the start of the program but within two decades of March 2014, the whole Southeast Asia region including India was declared ‘Polio free’ by the WHO.

The country accounted for nearly 60% of the total cases at the start of the program but within two decades of March 2014, the whole Southeast Asia region including India was declared ‘Polio free’ by the WHO. The last case was reported in January 2011 and the WHO removed India from the list of endemic countries with active polio transmission in 2012 (WHO, 2017).

Status of Polio in the world

The endgame strategy of the GPEI to get rid of the final 0.1% consists of two primary goals-

As long as a single child remains infected, children in all countries are at risk of getting polio. For a ‘Polio free world,’ consistent and collaborative efforts of eradication, integration and containment are required. Otherwise, we may see the global rise of as many as 200,000 cases annually within a decade (WHO, 2021).

*Update on the recent Poliovirus outbreak in London (22 June 2022)

The recently detected Poliovirus in London has been classified as ‘Vaccine derived Polio Virus Type 2’ (VDPV2) (Gov.uk). This type of virus is a strain of the live but weakened poliovirus used in the making of Oral Polio Vaccine (OPV). OPV is helpful in controlling epidemic and induces local immunity in the gut that’s why its still being used in the countries engaged in eradication effort (GPEI).

In the UK, OPV has not been used since 2004 when it was replaced with an injectable inactivated polio vaccine (IPV). IPV is processed with killed virus and is effective in protecting the immunised person from paralysis. The UK was declared Polio free in 2003.

People immunised with OPV can briefly shed virus in their faeces which can turn up in the sewage. The UK Health Security Agency (UKHSA) says that the virus found in London is probably imported by someone who was recently vaccinated overseas with the live form of the virus .

According to the UKHSA, no associated cases of polio have been detected so far and the public risk is low but people have been urged to ensure that their polio vaccines are up to date(Gov.uk).